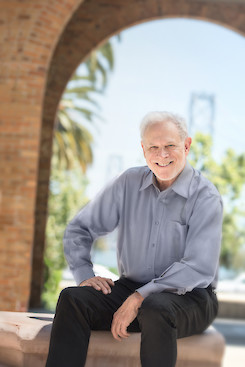 Richard Festinger has been a prominent and highly regarded figure in American contemporary music since the early 1980’s. An early interest in jazz in the 1970’s took him to Boston, where he worked with Gary Burton, Herb Pomeroy and Mick Goodrick at the Berklee School of Music, and he subsequently led his own groups as a jazz performer in the San Francisco Bay area before studying composition with Andrew Imbrie at the University of California in Berkeley.

A long time resident of Northern California, in 1985 Festinger founded the well-known San Francisco based contemporary music ensemble Earplay, which he continues to direct. In 1990 he joined the music faculty of San Francisco State University as professor of music theory and composition, and served from 2010 to 2018 as Artistic Director of the Morrison Artists Series, San Francisco’s longest established presenter of professional chamber music concerts.

Festinger’s work as a composer, comprising more than 80 compositions across a variety of genres, has been widely recognized for its elegance and emotive power. Frank J. Oteri, writing for the 2011 Tanglewood Festival of Contemporary Music, describes Festinger’s music as “notable for its combination of propulsive energy with an impeccable sense of poise and balance.” In his article on Festinger’s recordings in the Journal of the Society for American Music, Joshua Levine writes of Festinger’s work as “vibrant, skillfully wrought… intellectually and viscerally compelling music.” WQXR Radio has called him “an American master.”

The numerous awards and honors that have accrued to him include major commissions from the Koussevitzky Foundation in the Library of Congress and the Fromm Foundation at Harvard University, and his work has received the support of the National Endowment for the Arts and the Aaron Copland Fund for music. His works have been commissioned by the Argosy Foundation, the Barlow Foundation, the Mary Flagler Cary Trust, the Pew Charitable Trust, the Philadelphia Music Project, Meet the Composer, the American Music Center, and the American Composers Forum. He is a recipient of the George Ladd Grand Prix de Paris, and the American Academy of Arts and Letters has twice recognized his work, with both the Walter Hinrichsen Award and an Academy Recording Award.

Festinger has participated as a featured composer in numerous festivals, has taught as a guest composer at the Central Conservatory in Beijing, China, and has had numerous composing residencies, at the MacDowell Colony, Yaddo, the Aaron Copland House, the Rockefeller Foundation Study Center in Bellagio, the Bogliasco Foundation, Fundación Valparaiso, the Centre Récollets, Cité International des Arts, and Maison Dora Maar, among others.

Mr. Festinger’s music is published by C.F. Peters Corp. and Wildcat Canyon Press. Recordings of his works are available on the Bridge, Centaur, CRI, CRS and Naxos International labels.

Richard Festinger is represented by

Composer Richard Festinger has garnered international recognition for his extensive catalogue of vocal and instrumental compositions. Writing for the 2011 Tanglewood Music Festival, Frank J. Oteri describes Festinger’s music as “notable for its combination of propulsive energy with an impeccable sense of poise and balance,” and WQXR Radio in New York has dubbed him “an American master.” Festinger is a professor of music theory and composition at San Francisco State University. He received M.A. and Ph.D. degrees in composition from the University of California, Berkeley, and in 1985 co-founded the acclaimed San Francisco based modern music ensemble Earplay. Festinger’s music is published by C.F. Peters Corporation and Wildcat Canyon Music Press, and his works have been recorded for the Naxos, Bridge, CRI, Centaur, and CRS labels. He is the recipient of major awards and commissions from the Fromm and Koussevitzky Foundations, the National Endowment for the Arts, the American Composers Forum and the American Academy of Arts and Letters, among others.